The Woodford Baronetcy or Barony of Carleby was a title in the Baronetage of Great Britain. It was created on 28 July 1791 for Ralph Woodford, the former Ambassador to Denmark. His son, the second Baronet, was appointed Governor of Trinidad in 1813. The title became extinct after his death in 1828.

The village of Carlby (modern spelling) is four miles south west of Bourne in Lincolnshire near the county boundaries of Leicestershire and Rutland, about sixteen miles from the early Woodford manors of Sproxton and Knipton.

It has been claimed by sources including Burke's Peerage that this branch of the family descended from John Woodforde, the son of Robert Woodforde of Old, Northampton, and his wife Hannah Woodforde nee Haunch.  However, this is not proven and it is not possible to reconcile the known dates.

According to a note in family papers of the Ansford family, research by the Revd Adolphus Woodford, a descendant of the 1st Baronet of Carleby, proved that the family descended from a Nicholas Woodford of Idmiston.   Again, there is no evidence available to support this claim.

The Revd Matthew Woodford, who became sub-dean and prebend at Chichester Cathedral, was born in 1684/5.  He married Ann Shearer of Chichester, (possibly) in 1708. Their son:

1st Baronet of Carleby, Lincs., who died 26 August 1810, married Gertrude Reesen in 1778.  Sir Ralph has an entry in Boyle's Court and Country Guide and Town Visiting Directory for 1796.  His address is given as 22 New Norfolk Street in London, and his country home is given as Carleby, Lincs.

Their son was Ralph James Woodford, 2nd Baronet of Carleby, (1784-1828) who served as Governor of Trinidad. 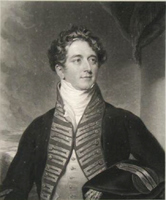 Archdeacon of Winchester from 1795 until 1807.  He was born in Southampton and educated at Christ Church, Oxford, where he matriculated in 1755, graduating BA. in 1759.   He was a chaplain to George III and held livings at Tadmarton, Chilbolton and Upham.   He died on 30 September 1807.

From his first marriage (to Mary Emperor), Colonel John Woodford of the Grenadier Guards had three sons.  The second son, Emperor John Alexander Woodford (fl 1791) was a Captain in the 17th Leicestershire Regiment.  From his second marriage (to Susan Cosmo Gordon, eldest daughter of Cosmo George, 3rd Duke of Gordon and widow of John, 9th Earl of Westmoreland, who died 1814), he had two more sons:  Alexander John Woodford (1782-1870) and John Woodford (1785-1879).  Little is known about this younger John.

Emperor John's `very valuable and elegant library' was sold at auction by Leigh and Sotheby on 11 May 1809.

Little is known about Mary, the eldest daughter of Matthew and Mary Woodford.  Ann married Peter Thellusson of Plaistow in Kent in 1760. Their son, Peter Isaac Thellusson became the 1st Lord Rendelsham.

Thellusson's will offers confirmation of part of the Carleby pedigree.  He is to be interred in the vault of Brodsworth Church in the County of York.  He leaves his wife, Ann, 300 guineas and his property in Kent.

He also gives 300 guineas to both his brother-in-law, Revd Matthew Woodford, Archdeacon of Winchester, and to Emperor John Alexander Woodford.

Sir Alexander Woodford was born in 1782.  He entered the army in 1794 as Cornet in the 14th Light Dragoons.  In 1795 he was appointed a Lieutenant and in 1799 joined the 9th Foot, from Winchester School, and was present in the campaign in North Holland in 1799.

He married Charlotte Mary Anne Fraser who died 2 April 1870.  They had at least three sons, Charles John Woodford who died in 1857 during the Indian Mutiny, John William Gordon Woodford who was born 23 November 1826 in Malta (his birth being registered by an army chaplain there in the following year), and his eldest son, the Revd Adolphus Woodford, who became a distinguished freemason based in London.

In 1800 he was exchanged and returned to England, and promoted by purchase to a Captain-Lieutenancy in the 9th Foot in the same year and exchanged into the Coldstream Guards as Lieutenant and Captain in 1800.

Woodford was appointed to the staff as Aide-de-Camp to Major General, The Honourable James Forbes, afterwards Lord Forbes, and was stationed at Ashford and Dover forming part of the army assembled on the coast to repel the threatened invasion of 1803.  In 1807, Sir Alexander rejoined the Coldstream for the Expedition to the Baltic, and was present at the capture of Copenhagen.  In 1808 he resumed the staff appointment as Aide-de-Camp to Lord Forbes and served with him in Sicily in 1808, 1809 and 1810.  In that year he was promoted by purchase to be Captain and Lieutenant Colonel Coldstream Guards, and joined the second battalion the same year.

In 1811, he joined the 1st Battalion serving under the Duke of Wellington in Portugal, and was present at the siege and capture of Cuidad Rodrigo, and with the corps covering the siege of Badjo.

He commanded the light companies of the Guards at the battle of Salamanca, in defence of the Arapiles, and was present at the capture of Madrid and the siege of Burgos.  Commanded the rearguard of the army in the retreat from Burgos.  In 1813 Woodford succeeded to the command of the 1st Battalion Coldstream Guards, and was present at the battle of Vittoria, and during the operations before San Sebastian, and in the Pyrenees.

He was present at the passage of the Bidassoa, and entry into France, and at the crossing of the Nive and Nivelle, and at the affair before Biarritz in December 1813. In 1814 he embarked in the Gironde for England and was promoted to 2nd Major Coldstream Guards, having been previously appointed Aide-de-Camp to the Prince Regent.  In 1815 he took command of the 2nd Battalion Coldstream Guards at Brussels and was present at the action at Quartre Bras, 16th June, and at the battle of Waterloo.

He was engaged as Senior Officer in the defence of Hougomont by the Duke of Wellington's special order, from midday until night and entered France a second time at the head of the Coldstream, at Malplaquet, as well as being present at the capture of Paris.  He served with the army of occupation for three years at Cambray and embarked for England from Calais in 1818. In 1820, Sir Alexander was promoted to be Lieutenant Colonel Coldstream Guards.  In 1825, he was made Major-General and appointed Lieut-Governor of Malta in that year, and as Major-General on the staff in the Ionian Islands in 1827 and second in command, Acting Lord High Commissioner in 1832.  He was appointed Lieut Governor of Gibraltar in 1835 and succeeded Lord Chatham as Governor in 1836 and remained in command until 1842.

Woodford was furthermore appointed Colonel of the 40th Regiment and was President of the Clothing Board for several years.  He was President of the Crimean Enquiry and wasas appointed Lieut-Governor of Chelsea in 1856 and Governor in 1868, Colonel of the Scots Fusilier Guards in 1863 and Field Marshall in the army in 1868. He received the Peninsular and Waterloo medals, the gold medal for Salamanca, Vittoria and the Nive, as well as the cross of Maria Theresa, and St George of Russia, and was Knight Grand Cross of the Military order of the Bath, and of St Michael and St George.

William Seymour in "Decisive Factors in Twenty Great Battles of the World" (Sidgwick & Jackson, 1988) writes "so close was the fighting that Bull's guns were no longer able to give support, but the arrival of Colonel Woodford with his Coldstream battalion - less two companies - drove the French away from the gate."

A daughter, name unknown at this time, was born on 8 January 1832 in Corfu.  Sir Alexander was appointed Lord High Commissioner of Corfu in 1832, but served in that role for just one year.  The death, in Corfu, of Cosmo George Woodford, aged three years `son of Major General Woodford' is recorded in the Bridgwater Advertiser (Somerset) on 5 August 1833.  Sir Alexander died in 1870 and lies buried in Kensal Green cemetery in London.

The photograph below is from the Roger Fenton Crimean War Collection in the Library of Congress in Washington, and shows Charles John Woodford standing next to his horse in 1855, just two years before his death. The photographer was Fenton.  Woodford is in the uniform of the Rifle Brigade.   He was killed in action at Cawnpore on 28 November 1857 aged 34 years. 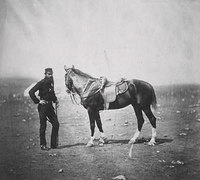 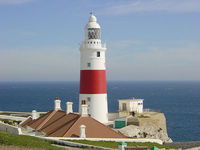 The foundation stone was laid by Governor Sir Alexander Woodford on the 26th April, 1838, with the assistance of the Masonic Order in Gibraltar and was opened on 1 August 1841, attracting over 2000 onlookers from the surrounding countryside.  It was automated in February 1994 and its light can be seen over a distance of 27 kilometres.