Mabel Folville, the wife of John Woodford, was the heiress of, even by the standards of the time, was a notorious Leicestershire family which included John, Eustace, Laurence, Richard, Robert, Thomas and Walter, the seven sons of John de Folville who died in 1310.

The worst of the brothers, judged by the number of crimes alleged against him, was Eustace Folville, with five murders and many other felonies; the next was Robert and then Richard, who in 1321 became the rector of Teigh in Rutland.

The manor of Ashby Folville passed to the younger John who, it appears, was the only brother not to have indulged in a life of crime. 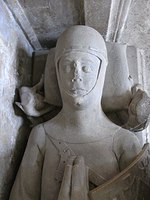 The tomb of Eustace Folville in St Mary's Ashby Folville

The Folvilles were first recorded as criminals when three of the brothers were indicted for participating in the murder of Roger de Belers.  This took place on 19 January 1326 on the road between Melton Mowbray and Leicester near Kirby Bellars.   The Woodford family was related to the de Belers. Lettice Prest, the sister of Alice Prest who married John of Brentingby, married James de Belers.

Eustace Folville was later charged with three or more further murders, a rape and three robberies. He was buried at St Mary's Church, Ashby Folville. The figure on his tomb is much defaced.

The Folville Cross. Probably 15th century. Said to mark the site where the murder of Roger de Belers took place.

It appears that most of the Folvilles' criminal activities were directed against the supporters of the Despensers.   On almost every occasion they avoided punishment and were pardoned for their alleged crimes.