This family takes its name from villages in the Woodford Valley near Salisbury in Wiltshire. Some of the men and women who left that village adopted the surname or were described as 'de Woodford'.

The Bishop of Salisbury held the manor of Woodford from before the Conquest until 1869 when it was transferred to the Ecclesiastical Commissioners.  They sold the land in 1920.

As the manor was in the ownership of the Church for over nine hundred years, few land or property transactions took place, so few records were created.  This lack of documents limits research into the people who lived there.

There are prehistoric sites on the higher ground of the parish, but only isolated buildings today.   A bridge at Upper Woodford was in existence in 1370. 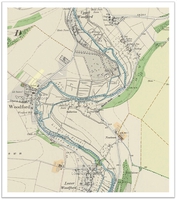