Samuel Woodforde was born in Castle Cary in Somerset on 29 March 1763.   He was the second son of Heighes Woodforde (1720-1789) and his wife Anne Dorville.  Within the family he is usually referred to as `Sam' or `the artist'.

Family legend suggests that he began his career by painting inn signs in the villages surrounding Ansford and Castle Cary for pocket money.

At the age of fifteen he received the patronage of the well-known banker Henry Hoare (died 1785) of Stourhead, Wiltshire.  Many of his earlier works are preserved here.  In 1782 he became a student at the Royal Academy where he exhibited pictures in 1784, 1785 and 1786. 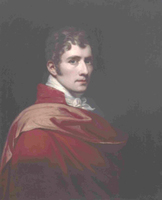 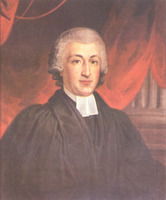 Little is known of Samuel's childhood years, and much of the family's information about the artist comes from entries in James Woodforde's diaries. We know from that source, for instance, that by the age of seventeen, Samuel was able to entertain at family gatherings by playing the violin.

Samuel was also a writer of diaries though many are now lost. The diaries that remain are for the years 1785 and 1786.

In 1786, thanks to the continuing patronage of Henry Hoare, Samuel Woodforde travelled to Italy where he was able to study the works of Raphael and Michelangelo in Rome. He also visited Florence and Venice, and returned to London in 1791, resuming his contributions to the Royal Academy in 1792.

In London, his address was 51 Great Marlborough Street. From 1792 until 1815 he was a constant exhibitor of portraits, scenes of Italian life, historical pictures and subjects from literature. In all, he sent 133 pictures to the Royal Academy, and 39 to the British Institution.  His `Dorinda wounded by Sylvia' is in the Diploma Gallery at Burlington House.  A watercolour `Pan teaching Apollo (1790)' is in the South Kensington Museum.

Many of his pictures were engraved, including the forest scene in `Titus Andronicus' engraved by Anker Smith for Boydell's `Shakespeare' (1793).

Most of Samuel's compositions are said to be in the correct classical style of his period.   He was elected an associate of the Royal Academy in 1800 and an academician in 1807.

On 7 October 1815 at Saint Bride's, Fleet Street in London, Samuel married Jane Gardner who it is assumed was one of his models and went to live in Italy.  She was born in about 1794.   A portrait of her by Samuel is in private ownership having been conserved through funding from the Parson Woodforde Society.

Samuel died of fever at Ferrara on 27 July 1817 leaving no children.