The Guildhall Library in London holds a volume catalogued as MS 1756 relating to Robert Woodford (b.1460) of Brightwell and Burnham in Buckinghamshire and his son, Thomas Woodford (b 1497 or 1484-1546).

Recent (2009) academic study has shown it to be arguably the most significant documentary source for information about the Woodford family in Leicestershire and Buckinghamshire in the 13th to 15th centuries.

The document was compiled in about 1510 with some additions in 1518.   It consists of thirty-three pages in several hands.  The remains of the original vellum wrapper contains a summary in Robert Woodford's hand of the division of the Woodford estate in 1460 by Sir Robert Woodford (1383-1455) between his younger sons intending to disinherit his grandson Sir Ralph Woodford (1430-1498). 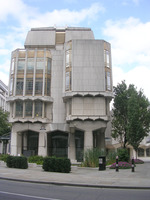 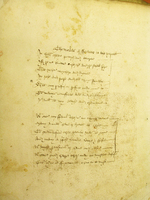 Quartered coat-of-arms from the Guildhall manuscript

This document supplements material in the Woodford Cartulary (Cotton Claudius XIII in the British Library) but in less detail.  Robert Woodford was a contributor to the Guildhall manuscript and also to the earlier  cartulary, which appears to have passed to the Roper family through the marriages of Margaret Woodford, the daughter and only child (and therefore heiress) of William Woodford, the eldest son of Sir Ralph Woodford.

There are some notes by the antiquary, Thomas Martin, on the first folio page.  On the second page is a list of accounts for 1518.  The document also contains terriers (catalogue of land ownership) and valuations for the Burnham area, an outline of the estates held by Robert Woodford (of Bucks) and a list with copy charters relating to his service as escheator of Bedfordshire and Buckinghamshire in 1509/10 together with some medicinal recipes.

There are also nine painted coats of arms for generations of the family from Sir Robert Woodford (1383-1455) to his great-grandson.

On the verso side of the folios containing the coats of arms are lines from Sir Thomas More's Fortune Verses.   Recent research has shown that Margaret Woodford's son married the sister of Sir Thomas More's son-in-law.

The manuscript may refer to a longstanding dispute over inheritance which began when Sir Ralph Woodford's grandfather, Sir Robert Woodford, attempted to disinherit him, and continued with the acquisition of Woodford manors by Margaret Woodford and her descendants.   The dispute may have created division between Margaret and her uncle, Robert (of Bucks).

It is possible that Robert and William (Margaret's father) were half-brothers.  The difference in ages would support the theory that William was the only child of the marriage of his father, Ralph Woodford, to a woman known only as Margaret, and that Robert (of Bucks) and his siblings (John, Matthew and Thomas) were sons from Ralph's second marriage to Elizabeth Villiers.

The Descendants of Margaret Woodford

Margaret Woodford (1479-1507) was the daughter of Sir Ralph Woodford's eldest son, William, and his wife Ann(a) Norwich of Brampton in Northamptonshire.  They had no other children.

Margaret was first married to John Turville who died soon after their marriage.   She was then married to his brother William Turville.  The legality of this marriage was questioned in the Court of Audience before Archbishop Morton and consequently she was 'taken from' William Turville and married to Thomas Morton, the archbishop's nephew.

Eleanor Roper married Sir Edward Montagu after the death of her husband.  He was Chief Justice of the King's Bench and a Master of the Bench of the Middle Temple.

According to its cover page, the Woodford Cartulary was owned at some stage by the antiquary Samuel Roper (1633-1678), the the eldest son of Samuel Roper (1592-1658), also an antiquary, who was the son of Thomas Roper of Heanor, Derbyshire.  At present I can find no connection between this family and Sir William Roper.   The date written on the cartulary (1670) is presumably when Roper donated the document to the Cotton Library.

For an outline of other associations between the Woodford family and Thomas More, please see A.S.G.Edwards & M.T.W.Payne, A New Manuscript of Thomas More's Fortune Verses, De Montfort University, Leicester and the Guildhall Library, 2009.   See also pages on this website for the Leicestershire Descent and the Dispersal of the Leicestershire family